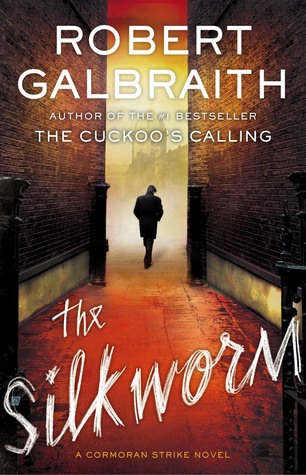 “The Cuckoo’s Calling” was one of my favorite books of 2013 so I’ve been eagerly awaiting the release of its follow-up “The Silkworm”. By page two, I was already hooked and thrilled to be brought back into the world of London’s most famous private investigator, Cormoran Strike.

Strike again finds himself embroiled in an intricate and potentially dangerous mystery, the disappearance of novelist Owen Quine. Hired by Quine’s long-suffering wife Leonora, Strike finds that Quine wrote an unpublished “poison-pen” novel “Bombyx Mori” that left Quine with a few high-profile enemies. When Strike discovers that Quine has been murdered in the same grisly way as the main character in “Bombyx Mori”, the list of possible suspects narrows to a small circle within the publishing industry.

In my opinion Robert Galbraith (a.k.a. J.K. Rowling) is one of the best mystery writers publishing today and one of her strengths as a master storyteller is the interesting worlds that her books capture. There’s depth and cultural insight in this series beyond the mysteries themselves.

In “The Cuckoo’s Calling”, I loved reading about the world of supermodel Lula Landry who was adopted into an upper class British family and found herself in the worlds of high fashion, music and celebrity but never really fit in. Set in the cut-throat London publishing and literature scene, the characters in “The Silkworm” are equally interesting. It explores the snobbery, jealously and backstabbing that goes on between novelists, editors and agents. Quine, who only had one bestselling book in his career, felt like he was an underrated and misunderstood author. People assumed that “Bombyx Mori” was his revenge against his colleagues.

Cormoran himself is caught between several worlds that he balances and rejects at the same time: the unstable world of his childhood with his groupie mother, the celebrity lifestyle of his estranged rockstar father and the posh, high-society existence of his ex-girlfriend Charlotte. Since he doesn’t seem to feel comfortable in any of these realms, he has carved out his own spot in the world. It will be interesting to see how Strike and his two-person investigative firm develop over the course of the series.

The mystery is intricate and develops quickly. Once you get about halfway through the book, it is impossible to put down. The reader sees how Strike is gathering the clues and piecing them together in his head but as an outside observer, you are never exactly sure what he is thinking. I didn’t guess the ending of either “The Silkworm” or “The Cuckoo’s Calling”.

Like in the Harry Potter series, Rowling is gifted at writing the main, secondary and peripheral characters. Each character that enters the story comes to life even if they are only around for a line or two. Strike and his partner Robin, we met both in “The Cuckoo’s Calling”, are extremely well-written and their characters are further developed in “The Silkworm”. Robin’s fiancé Matthew is a bigger part of the story this time and he fits into the novel seamlessly. Strike’s half-brother Al Rokeby, a legitimate son of Strike’s rocker father Jonny Rokeby, is a good addition to the series. I’m sure that Jonny Rokeby himself will eventually appear in the series.

Rowling recently told the Theakstons Old Peculier Crime Writing Festival that her next Strike novel (which she is currently halfway through) is her “best-planned” novel yet. Considering how great her other books are, I can’t wait to read it. In the meantime, I’m looking forward to the return of Detective Frank Mackey and the Dublin Murder Squad on September 2nd when Tana French’s new book The Secret Place comes out.