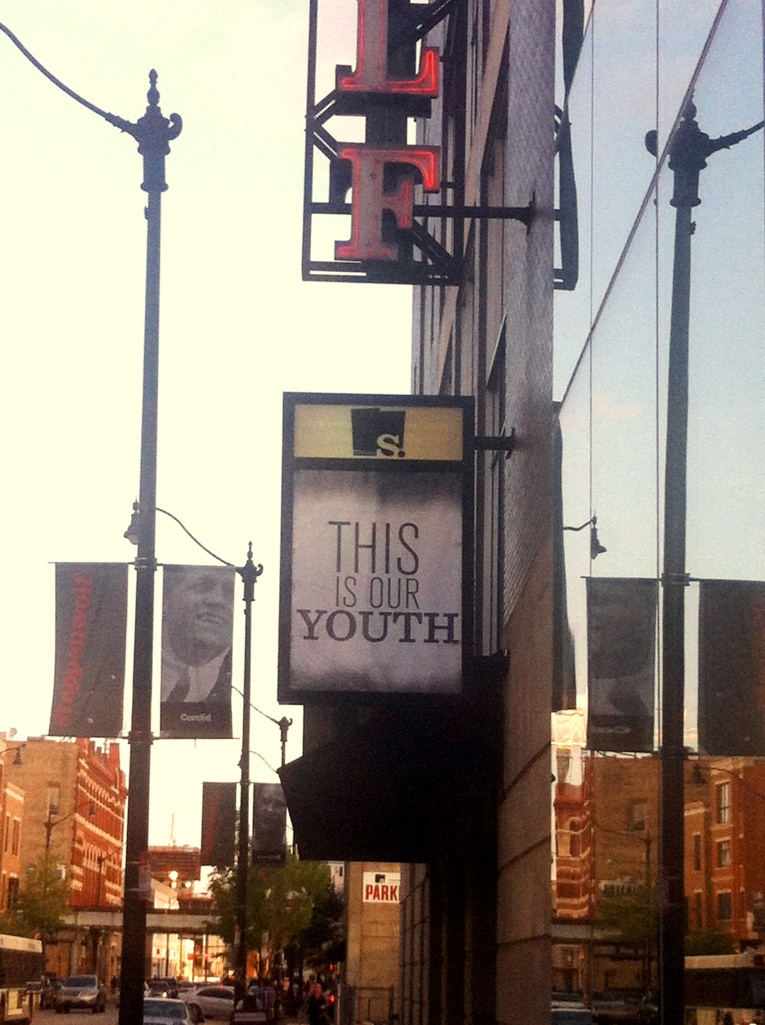 I haven’t been as excited to see a play as much as Steppenwolf’s current production of This Is Our Youth since I went to see Wicked as a teenager.

With a well-written script and engaging performances, the play, directed by Tony winner Anna Shapiro and starring Michael Cera, Kiernan Culkin and Tavi Gevinson, lives up to the hype.

Set in 48-hour period in 1982 with a group of three characters who are bridging the gap between childhood and adulthood, Kenny Lonergan’s 1996 play still feels relevant in 2014. The early adulthood transition is rich with material worth exploring and Lonergan makes great use of it.

Instagram, Twitter, Facebook and iPhones haven’t been invented yet but the universal themes of transitioning into life as an adult haven’t changed that much. It’s not an overnight change for anyone and the bridge period is one of the most exciting and frustrating times in everyone’s life. It’s a different experience for every individual and can last for months, years, decades or even a whole lifetime.

Each character is at different points in their passage but they are all struggling with change in a different way. Dennis (Kieran Culkin) lives in an apartment paid for by his parents and is trying his hand at entrepreneurship, a.k.a. petty drug dealing amongst his friends.  Warren (Michael Cera) still lives with his wealthy father but winds up staying with Dennis following a big fight. Jessica (Tavi Gevinson) lives at home while she studies at the Fashion Institute of Technology. She appears to have more direction in life than Warren or Dennis who are trying to live on the edge while under the protection of their parents’ money.

The action starts when Warren shows up at Dennis’ place with $15,000 in cash that he’d just stolen from his dad’s bedroom. Dennis is terrified to have the stolen cash in his apartment and involves Warren in schemes to earn the money back that he’s already spent. Warren has a crush on Jessica and their relationship grows and wanes over time.

Conversations between Warren and Dennis and Warren and Jessica sometimes create conflict and bonds while bringing out their deepest inner thoughts, motivations, past experiences and ideas. It has some of the best banter that I’ve ever heard in a play.

Comedy and drama are seamlessly mixed together throughout the performance. The audience laughed out loud countless times but more serious themes of death, family issues and violence were explored thoughtfully which is a rare balance.

Even with a great script, the actors’ pitch perfect performances made the play exceptional. Culkin was hilarious and it was impossible to take your eyes off of him every time he spoke. Cera’s performance as the conflicted Warren was nuanced and natural. Gevinson, who is also a brilliant teen mogul, was really engaging and energetic as the thoughtful Jessica. I’ve already seen Cera in several movies and I hope to see Culkin and Gevinson in more after this play.

One of the best parts of the production is its intimacy. It’s in Steppenwolf’s 299-seat Upstairs Theatre and there isn’t a bad seat in the house. Performed in the round, the action feels less like a staged performance and more like you are sitting in the room with the characters. I was only feet away from the actors and stage and as the play went on, I forgot I was at a play.

I highly recommend it and I would go again if the opportunity arises!

The Chicago-run of the play continues through July 27 (and appears to be entirely sold-out) and then it moves to Broadway’s Cort Theatre on August 18 and runs through January 4th.  The play will not be staged in-the-round in New York.

One of my favorite lines from the play is said by Jessica to Warren towards the end of the first act, “What you’re like now has nothing to do with what you’re gonna be like. Like right now you’re all this rich little pot-smoking burnout rebel, but ten years from now you’re gonna be like a plastic surgeon reminiscing about how wild you used to be….you’ll definitely be a completely different person. Everything you think will be different and the way you act and all your most passionately held beliefs are all gonna be completely different and really depressing.”

Update: Lonergan wrote an interesting feature on Tavi Gevinson for Vanity Fair ahead of the play’s run on Broadway starting this month.

Check out this interview Steppenwolf did with Tavi Gevinson, Michael Cera and Kieran Culkin. (From Steppenwolf’s YouTube account)